Another Week, another non-blog blog. We’ll return to our regularly scheduled program next time.

Anyways, this week is my most looked forward week of the year. Even moreso than E3, this week is the San Diego Comic Con, the larget convention of its kind in the world. Last year over 120,000 attended the convention over the four days, a convention which filled every last exhibit floor, ballroom, and conference room of the San Diego Convention center. I’m volunteering this year so I get in the doors for free with three hours of volunteer work. The convention begins Thursday, but the exhibit hall is open for a few hours on Wednesday, which is designated a ‘Preview Night,’ probably the least crowded day of the convention.

As many of you well know, I’m pretty much broke, so my spending will be somewhat tempered this year. Somethings I do plan to pay for include an autograph from Mark Hamill to (reasonably) complete my Star Wars Shadows of the Empire Limited Edition graphic novel. 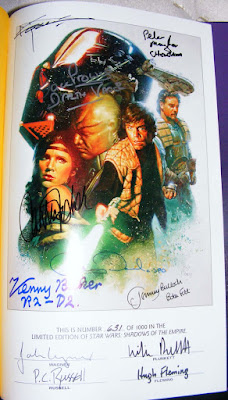 The Book is one of 1000 hardcovers printed which normally comes signed by the comic’s creative team but I’ve gone and gotten some additional autographs including Christopher Moeller, who did the cover art for the hardcover’s dust jacket and who has also done artwork for Magic: the Gathering and did the cover art for Batman: Dark Tomorrow, Peter Mayhew who played Chewbacca, Kenny Baker who played R2-D2, Dave Prowse who played Darth Vader, Jeremy Bulloch who played Boba Fett, Anthony Daniels who played C3-P0, and Carrie Fisher who played Princess Leia. Mark Hamill is the last reasonable autograph I can get to complete my book. After that I’m looking at acts of god to get Harisson Ford, Ian McDiarmid, Billy Dee Williams, and James Earl Jones.

I’ve also got about 60 Magic: The Gathering cards I’m hoping to get signed. The artists are spread all over the convention and some aren’t even at a booth so I’m going to need a little bit of luck to get them all. I’m probably most excited that Jeremy Jarvis, Magic’s Artistic Director, will be there as he’s done a ton of my favorite cards. I hope to also nab a few MTG proofs while I’m there. For those of you that don’t know, each artist is given fifty copies of the cards their artwork appears on. These cards look identical to production cards except for the fact that they have plain white backs. They’re neat little collector’s items and the artists are usually glad to do a sketch or something on the back for you.

I’m also stopping by Billy Tucci’s booth. Tucci is an independant artist who started his own company, Crusade Comics, and became known in the comic world for doing the Shi comics. The guy is extremely friendly. I think I spent like an hour at his small booth last year. When he does a sketch for you he has you sit in a chair beside the booth and will happily shoot the shit with you for a while. Its really a great time. I always buy a sketchbook or two of his, whose cover he’ll gladly sketch for you. In recent years I’ve had me draw me a Harley Quinn and a Black Cat. I’m not sure what I’ll have him sketch for me this year, but I’m also getting a sketchbook for a close friend of mine who loves the way he draws eyes so I’ll proably ask for a sketch similar to this: 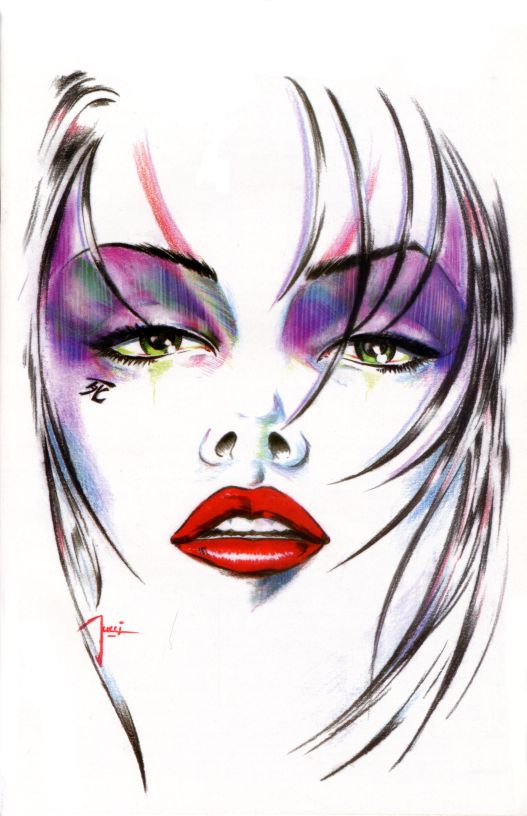 That’s the cover of Shi: Way of the Warrior #1, Fan Appreciation Virgin cover (virgin in that it is only the artwork and doesn’t include the logo or barcodes or anything), one of which I’m getting signed for the same friend.

I’m also planning to get a Cylon sketch from Stjepan Sejic, a brilliant artist that’s right up there with Alex Ross in my eyes. He’ll be doing free sketches (with a ticket) and does commissions, which I can’t afford at this moment. Here’s some of his Battlestar Galactica artwork, though he’s recently made a name for himself doing work for Witchblade and the Darkness, two of my favorites comics. If you’re interested, here’s a link to his deviantart.

Let’s see, what else? Oh. Thomas Jane, who I think played an awsome Punisher, will be at the convention again this year. Last year I had him sign some Punisher comics as well as my DVD and a copy of the Punisher game, which was unrelated to the movie but which he voiced the Punisher in. Its an awsome game that I suggest you check out. This year I’ll be having him sign my copy of GUN, in which he voiced the protagonist.

There will also be a couple of people there from the classic Aussie movie, the Road Warrior so I’m hoping to have them sign my hd-dvd. And finally, there will be a limited autograph session with Clive Barker. If I can, I want to have him sign my copy of Jericho, a game which was much maligned in the media but I enjoyed quite a bit.

The Penny Arcade booth is also a yearly highlight of mine. Mike/Gabe does free sketches, something I take advantage of every year. I try to get weird things sketched instead of the usual Gabe/Tycho. So far I have a Reggie Fils-Aime, George Lucas, and Gabe’s WoW Character:

I’m not sure what I’m getting this year. I’m sort of stuck between little Gabe and Tycho

or Professor Layton Tycho
I’m also going to ask them if I can develop a game based on one of their three recent creations while I’m at school, perhaps Jim Darkmagic. But maybe that can wait. We’ll see when I get there.

I’ve also been unable to find information about artist signings at the big publisher’s booths like Marvel and DC, which is weird. Although Marvel has announced a drawing for a Stan Lee signing, although if its anything like last year, its going to suck balls. My sister and I entered the drawing and both got pulled. Unfortunately, Marvel has terrible line management so they cut the line short, like right in front of me. What really sucked was that Marvel just kept pulling names instead only pulling what was actually manageable in the time frame. I still have my winning ticket, though I can’t really try to reuse it this year simply because Stan Lee will be signing the day I won’t be attending. Oh well.

Of course, there will be a lot of wandering around and seeing sights, but that’s pretty much what I’m hoping to do while I’m there. lol, had I actually had a job right now, this blog would be like three times as long. I’ll try to get back to my regular game-related posts in a couple of weeks. I thank and respect anyone who actually read everything to get to this sentence. If you just scrolled down and read this sentence, you are a cheater and you should be ashamed of yourself.